the ways that people interact with the river just upstream from the bridge differs greatly from the life and work with the river at the siugulan bar. several people from cawi’ and laeno work for the white water rafting companies that take tourists by raft flotilla downstream from ruisui all the way to the new changhong bridge. however, the work of catching fish larvae at the siugulan bar sustains differently configured lives and ways of thinking about the environment. even if one considers the role of markets in which fish larvae provide cash income (and eels for japanese bento boxes), misafang, work with triangular nets at the river mouth, connects to memories of subsistence gathering and notions of the ocean as a nurturer. the whining outboard motors and gleeful, surprised shouts of the white water rafting tourists sound a different relationship to the river than the playful conversations, prayer, and singing of fishing people at the river mouth 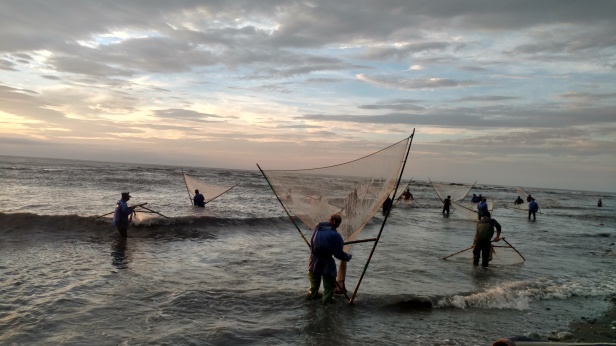 working safang in the early morning hours. june 2017 at cepo’. photograph by djh

the contrast of these two worlds of work and recreation just 600 meters distant from each other captured my imagination, all the more because these worlds are permeable: one can misafang in the early morning, go home to take a shower, and go to work at the white water rafting companies. the river mediates between these two worlds and, traveling upstream or downstream, one can change one’s ethical relations and understandings of space and social life

mipulaw, or taking fish larvae from the river mouth, is a contested practice in taiwan today, given a rising environmental awareness. one of the contrasts that we could explore is how the white water rafting is configured as adventure and natural but actually requires a great deal of motorized vehicle support–rides from the river mouth to ruisui and the use of outboard motors on the rafts. safang, for their part, are usually constructed out of bamboo, rope, and a bit of metal for hinges or for securing the bamboo arms. nonetheless, controversy concerning gathering pulaw at the river mouth rages. is eating the fish larvae damaging to the environment even if one eats only locally, hand gathered ones? the arguments here resemble those concerning wearing a fur inherited from one’s great grandmother. when does participating in a local gathering economy signal to those outside of that local economy acceptance of culinary practices that damage the environment (because these culinary practices outside of the local framework may depend upon unsustainable, industrial fishing practices)? and what about the rising environmental awareness of the fishing people themselves? how do they adjudicate between mipulaw as a traditional practice, its entanglement in market economies that distribute fish around the island and to japan, and their own commitments to sustainability? recently, misafangay have attempted to demonstrate these commitments through catch and release programs for horsehair crabs, as well as publicized events for beach cleaning in which members of the “net-izens society” (網友會－－a play on net and internet) raise awareness of pollution from agriculture upstream and indiscriminate use of nets on the open ocean

the piece “just a bridge between them” can only suggest these questions. in the piece, reverberations of the bridge suspension system’s whistling song alternate between sonic figures of each different world, separated by the bridge. this is a work in progress. let me know what you think!

just a bridge between them. sound piece 15:22

2 thoughts on “just a bridge between them”

noises from the floor 讀眾的聲音